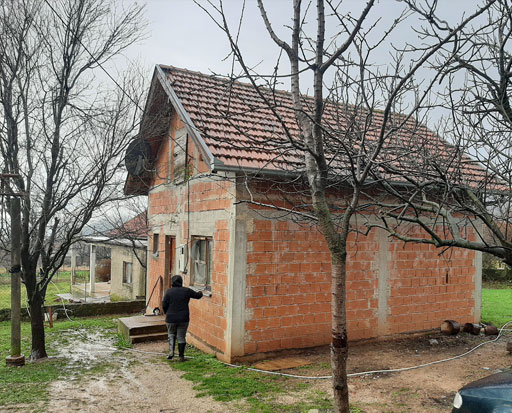 Z and her parents lived in an old house which was almost totally destroyed during the war.  After the war, the government helped some poor families to rebuild their homes so that they could return.  As this house was in such bad condition, the government built a tiny house consisting of two rooms for Z and her parents.  Sadly, both parents died last year.

Z is very tidy and a hard worker.  She has a job in a bakery earning €270 a month.  This covers her monthly expenses but she is not able to repair her house.

Windows and doors need to be replaced, new bathroom facilities installed as well as inside painting and water-repellent insulation fitted to the outside walls of the house.  Cost estimate approximately €7,000 of which our share is €3,500 as we split costs with Fr Slavko Barbaric’s Humanitarian Aid Organisation.

Z is very supportive and lets her cousin and his family live in her old family house.  They also needed our help.  Please read “Cousin of Mav Lady” story.