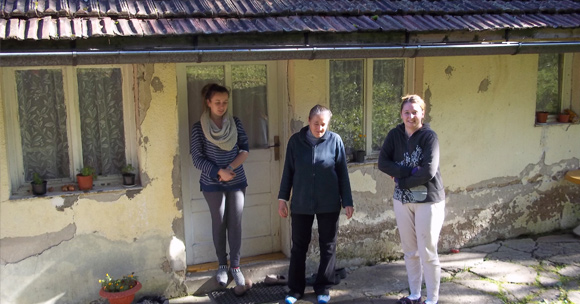 Donate Now
You are donating to:

In October 2013, Sr Jelenka wrote to the directors to ask for help with two very poor families. Two mothers were trying to raise their families on their own. At that time, the directors could not afford to purchase two homes, which is what Sr Jelenka asked for. The family stories were as follows:

Slavica, is a widow whose husband was killed by a falling tree three years ago. He was working in the woods to find timber to sell in order to provide for his wife and three daughters. Slavica receives a pension of 310 KM per month (€150) but after paying rent of 100 KMs (€50) and utility bills, there is very little left for her and her daughters. Meri, the eldest, was unable to attend College and takes work wherever she can find it. Ivana is studying Political Science at Sarajevo and would like to do her Masters if the funds can be found. Kristina, 16, is at high school and would love to go to university. After the father was killed in the woods, his brothers sold the home and animals and kept the money. Since then, Slavica and her family have lived in damp, old houses. They did not have enough wood to provide heat in the long, cold Bosnian winter months and they could not afford good shoes to keep them warm. Social Services told them that they did not have any funds to help them.

Katica is 44 years old and has two daughters of 15 and 12. They live in an old rented house and pay 100 KMs per month (€50). They only have water for 4/5 hours per day for some months of the year so it is not a healthy home in which to rear a family.Katica works at a kindergarten and earns 700 KMs (€350) per month and cannot ever hope to afford a good home for her family. She and her husband parted over five years ago because of nationality and religious reasons and he does not support his family in any way. Providing heat for the winter months is a huge problem for Katica too. 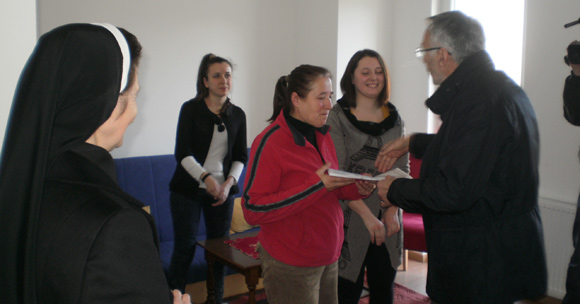 In October 2014, Sr Jelenka met with Donal O’Shea and Pat Henry. She told them that Katica and her family were now living in better conditions, having been helped by a kind person. Once again she shared the painful story of Slavica and her daughters. Donal and Pat listened to the sad story and saw photographs of their current living conditions. They asked Sr Jelenka to find a one bedroomed apartment as the €20,000 price was by then affordable. Shortly afterwards, she found an apartment in Kiseljak, near our Kindergarten. Slavica and her three daughters moved in before Christmas and they cannot believe that their prayers have been heard. Please see Ivana’s story under the Education heading. We very much hope that we can help Ivana and her younger sister, Kristina, with their education. You can be assured that Sr Jelenka and Slavica are praying for the kind donors who made this possible.

Each Christmas we try to send €1,500 to Sr Jelenka to help poor families and they are most grateful for the support. Some families need help with day to day living but others are in need of a home. In spite of huge efforts to repatriate them, there are still thousands of people living as refugees having been ethnically cleansed during the war. They have no home apart from a hut with a tin roof in a refugee camp.

If you would like to help on a regular basis, please download a Standing Order form from this website. No amount is too small. If you would like to provide a home or rent for a refugee or poor family, that would be a huge blessing for the least of the Lord’s brethren.

Thank you for all that you do already to support our work in Bosnia Herzegovina with poor, vulnerable, marginalised people.