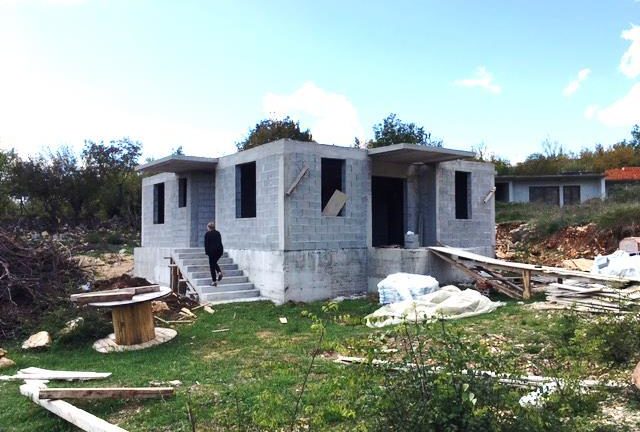 This family of eight was brought to our attention by the Franciscan priests of Medjugorje.  The father, Z, was 17 years old at the start of the Yugoslav war of ’93 – ’95.  We can only imagine what he saw and what he was forced to do during those cruel years.  What we do know is that he turned to drugs to help him cope with life.

In spite of his problems, he and K got married and had five children.  Z’s addiction was a huge problem so in 2009, he entered the Franciscan Community of the Merciful Father which is based in the grounds of Mother’s Village Orphanage.  While Z lived through the rehabilitation programme, his son lived with him.

During that time, his wife and three youngest children were cared for in the Women’s Refuge nearby while the oldest girl, lived in one of the orphan houses.  So, for four years, Mother’s Village was home to the whole family.

Z responded to the life of hard work and prayer and in 2013, he was fit to move on.  They found a house and in time had another baby.  Soon afterwards, Z got a good job earning €600 per month but he had to travel long distances every day.

His mother gave Z a piece of land on which to build a home.  The land is beside the home of his brother and his family.  They very much want Z, K and their six children living near them so they can have family support.

Working with Fr Slavko’s Humanitarian Aid charity, we are providing 50% of the cost of building a house for the family.  Z, his brother and other family members and friends are doing most of the work with supervision from a builder who is employed by us.

The photograph below was taken in November.  We look forward to seeing the completed home and to knowing that the family can have some comfort and security for the future.  Our 50% costs are €15,000.

Bedroom with Single and Bunk Beds

Kitchen area which has a wood burning stove

Materials and some building work costing €30,000 were funded by Arthur McCluskey Foundation and Fr Slavko Barbaric’s charity.  The family will add a second story later and do the landscaping.